I told this story on Natalie Hartford’s blog, but I wanted to share it with everyone here, too.

A few weeks ago, I was driving Grace about an hour a way to meet my mom so she could stay with them for the weekend. Traffic was slow for several miles because a crappy car with a passenger door that didn’t match was holding up the left lane. You know the drill: the car in the passing lane is going about a mile and a half faster than the one it’s trying to “pass” in the right.

I was two cars behind and had swung out a couple of times to see what the hold up was. Yes, I’m impatient. And I was running late. After about ten minutes the right lane opened up, and I jumped into it. When I got up to the mismatching car responsible for the line of pissed off drivers, I automatically looked to the right. I had to put a face on the person I was internally cursing.

What did I see? A woman pushing eighty with her face pressed against the passenger window, screeching and holding both middle fingers up at me. I was too shocked to do anything but laugh. When I passed and looked back, I could see her in the rearview mirror, banging on the dash and presumably still cursing at me. 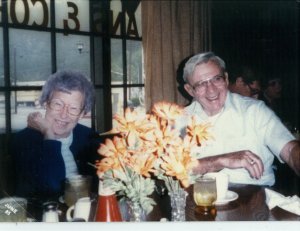 Grandma and Grandpa Green. I was incredibly lucky to have them as grandparents. He passed in January 1998, on her birthday. She died February 2010. Not a day passes I don’t miss them.

After I stopped laughing, my mind immediately conjured up an image of my Grandma Green. She loved her grandkids, and her house was always well-stocked with candy and fudge-stripped cookies. She didn’t like to cook and wasn’t good it. Spaghettios and sandwiches were her specialities. She did cook on Christmas morning, and her sausages ended up the size of silver dollar. I thought that’s how they were supposed to look until I got to college!

Grandma Green was sweet as pie until you made her mad. Then she could cut you down with a single glare. We all equally loved and feared her.

She spent the last ten years of her life bedridden and slowly losing her senses, especially her short term memory. But her long term was there, and I often wondered if she was trapped inside her head, in a different time. I hoped so, because she was miserable stuck in that bed.

Grandma held grudges (I inherited that lovely trait from her) and wasn’t afraid to say what she thought. I like to think if she hadn’t shut down the way she did, Grandma Green very well could have been that feisty old lady flipping me off.

In the spirit of missing my Grandma, I had to share some of my favorite “angry elderly scenes” from YouTube. Please don’t misunderstand: I’m not making fun of older people. I respect them greatly. But getting old is no fun, and I can’t blame for being mad at the world.

Quite possibly one of my favorite scenes of all time. I laugh out loud every time I watch it.

Naturally, YouTube had all sorts of angry old ladies to watch.

This lady is me in about forty years. If I had one of those scooters, I’d do exactly the same thing.

This one had tears in my eyes. Had I been filming these two I probably would have dropped the camera.

A loving couple that’s been together most of their lives. More curse words ahead.

This is one of my all-time favorite commercials. The first time I saw it I spilt my drink I was laughing so hard.

Last but not least, this came up in my YouTube search. The lady isn’t really old, but you all know my love of raccoons, and I had to share.

Do you have any stories with elderly relatives to share? Do you have that grandparent or aunt you walk on tiptoes around? Or one that’s so crass and cranky you love being around?

Stacy Green is the best selling author of psychological thrillers and mystery with a dash of romance. As a stay at home mom, she's blessed with making writing a full-time career. She lives in Iowa with her supportive husband, daughter, and their three fur-babies.
View all posts by Stacy Green →
This entry was posted in Manic Monday and tagged author, family, humor, Manic Monday, Stacy Green, Stacy Green Turning The Page, writer, YouTube. Bookmark the permalink.

24 Responses to Manic Monday: Old Lady Flips Me Off