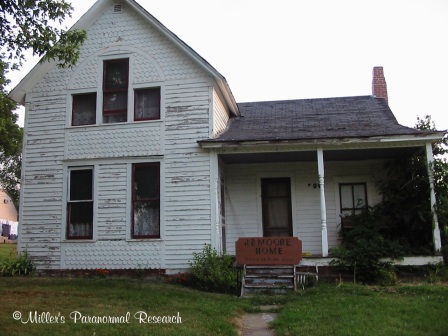 I’m leaving later today to visit my best friend in the Twin Cities, so I’m reblogging this post. The Villisca Axe Murders were my second ever Thriller Thursday, and this is a new, much improved version.

On June 10, 1912, the sleepy little town of Villisca, Iowa was changed forever. Josiah Moore, his wife Sarah, their four children (Herman, Katherine, Boyd, and Paul), and two friends were found murdered in their beds, their skulls crushed. Lena and Ina Stillinger had gone to church with the Moore’s and had been invited by Katherine to spend the night.

The crime has never been solved.

The bodies were discovered when a neighbor realized the Moore’s hadn’t started their outside chores. Josiah’s brother went to the house to check on the family and found them all brutally murdered. 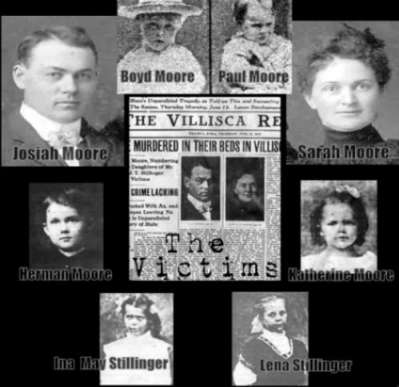 Word of the bodies spread and inexperienced police lost control of the crime scene. Historical counts have more than one hundred people traipsing through the house to gawk at the bodies before the National Guard arrived.

In town, shock and grief led to frightened citizens taking up arms and suspecting one another. Reporters and private detectives came from all over the country for the story while law enforcement agencies in neighboring counties and states assisted the overwhelmed town police.

With such a muddle crime scene and a century having past, it’s hard to keep the facts straight. The official site of the Villisca Murders lists the following as facts: 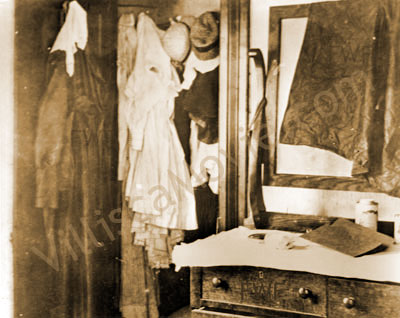 Crime scene photos of Villisca were thought to have been lost (or non-existent) but this recently discovered photograph is thought to be taken shortly after police arrived on scene. 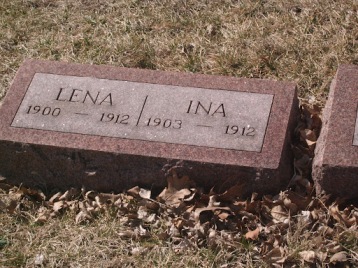 The grave of Lena and Ina Stillinger, the sisters who spent the night at the Moore’s.

The murderer—or murderers—left behind a load of forensic evidence. Had the crime happened today, perhaps it would have been solved. But in 1912, fingerprinting was in its infancy, and DNA testing unheard of. Even if the scene had been properly processed, authorities probably wouldn’t have been able to use the evidence. 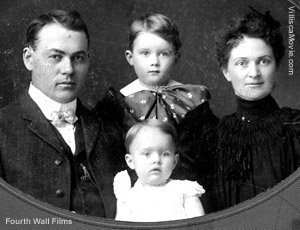 Still, there are suspects. Many point to Frank F. Jones, an Iowa State Senator, as the murderer. Victim Josiah Moore had worked for Frank Jones for years. When he left and started his own implement company in 1908, Jones was furious. Moore had stolen the John Deere franchise from him. Rumors also floated around that Moore had an affair with Jones daughter-in-law, and his son was accused of being a co-conspirator. They were never arrested. 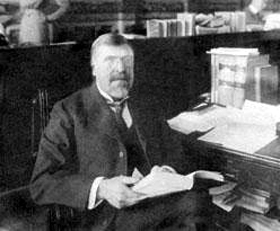 William Mansfield from Illinois was suspected of being hired by Frank Jones to commit the murders. One investigator put together a case to bring to the grand jury, pinning not only the Villisca murders but several other axe murders on Mansfield. Insufficient evidence was found. He was released.

Rev. George Jacklin Kelly was also a suspect. He was a traveling preacher and had settled in Macedonia, Iowa. In 1917, he was arrested for the murder of ONE of the victims (but experts argue they were committed by the same person). Kelly attended the church and children’s program the day before. He left town early on the 10th. 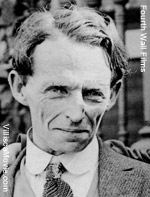 Kelly confessed, but it was withdrawn before trial. The Villisca site calls his confession a “mockery of law enforcement practices at the time.” Kelly’s first trial was a hung jury; he was aquitted in the second.

The third school of thought is that someone unknown to the area killed the Moore’s and Stillinger girls–a serial killer. Federal Agent McClaughry, assigned to the Villiscia murders, believed Henry Moore (not related) was the killer.

In December 1912, six months after the Villisca event, Henry Moore was arrested, prosecuted, and convicted of the murders of his wife and maternal grandmother in Columbia, Missouri.  In that incident, he’d used an axe. Known to be a mean drifter, prone to fits of anger, Moore is a fitting suspect as many experts believe the killings were committed by a transient.

Agent McClaughry interviewed Moore in prison and decided he was responsible for at least 23 murders. McClaughry believed Moore was the Iowa killer, but no one followed up, and he was never prosecuted. 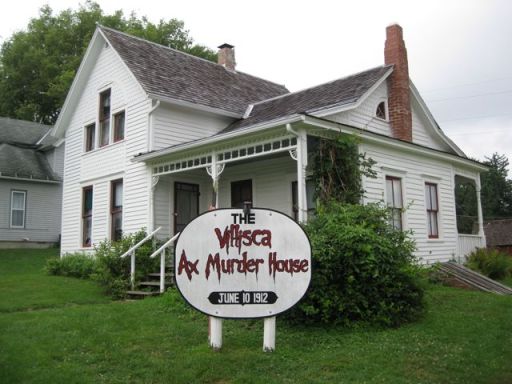 Visit http://www.villiscaiowa.com/, the official site of the murder house, to learn more.

The Villisca House is a now a tourist attraction on the National Registrar of Historic Places. Stories about it being haunted abound. The official site of the murders says paranormal investigators have gathered visual and auditory evidence of a haunting. Objects move, psychics claim to have seen spirits.

Who do you think killed the Moore family? Is it possible to solve a hundred-year-old murder?