This is an interview I ran more than a year ago, as a Monday post. In light of the senseless tragedy in Connecticut, I couldn’t bring myself to talk about true crime this week. Instead, I’m sharing this interview for all my new followers. Matt O’Brien is the journalist who wrote Beneath The Neon: Life and Death in the Las Vegas Tunnels. The book is a fascinating – and heartbreaking – look into the lives of the Las Vegas homeless. Matt was nice enough to tell me about his journey through the tunnels and his efforts to help the inhabitants. Don’t miss your chance to help me give back at the end of the post! 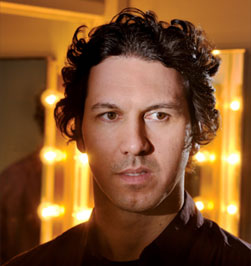 I first heard about the people living in the Las Vegas storm drains last summer, when I was researching for INTO THE DARK. A Google search led me to several newspaper articles profiling Matthew O’Brien’s book, Beneath The Neon: Life and Death in the Tunnels of Las Vegas. O’Brien spent a summer exploring the many flood channels that run underneath the city and getting to know some of the residents who call the tunnels home.

In the summer of 2002, Matt O’Brien, then editor of Las Vegas CityLife, explored the storm drains with reporter Josh Ellis. In 2004, Matt took a sabbatical from CityLife and set out to explore more of the drains on his own. Those stories became Beneath the Neon.

The book is heartbreaking, humorous, informative, and at times, scary. It also gave me a whole new world to explore in Light and Dark, so I nervously contacted Matt about an interview.

He was nice enough to talk with me about Beneath the Neon, and I’m really excited to share the interview with you.

Hi Matt! How are you?

I’m good. How are you doing? Thanks for reaching out to me. I enjoyed reading over your blog.

(I’m happy we aren’t Skyping because I’m blushing to my hair).

Thank you. I’m just plugging away.

Thank you. I have to tell you, I found out about Beneath the Neon by accident. I Googled Las Vegas tunnels, thinking there would be historical references for the mobs. I was blown away.

A lot of people locally still don’t know about them even though the book received so much attention. But now that it’s become a little more common knowledge, I get the occasional email from people wanting to know what they can do to help. Seems like people are a little more sympathetic toward the cause. Just not a lot of people understand this is going on in Vegas.

I know the Vegas housing market has gone down in recent years. How has it affected the homeless?

The people who live in the tunnels live off the excess of the city. When the city is doing well, they dumpster dive, panhandle, credit hustle. With more tourists, they seem to do better, and they seem to be suffering in this economy.

You interviewed some really interesting people in Beneath the Neon. Have you been able to keep track of them? (I asked about a man called Lawrence, a talented writer trapped in the tunnels by his own demons.)

I only saw him once, when I was working at CityLife, probably a year or two after the interview. He came by the newsroom to say hello. I’ve been by his camp, and it’s obvious he’s not living there. Lawrence, like a lot of people you meet in the tunnels, you just have no idea what’s become of them. Some are dead, some are in prison, some have moved to a different place in the drains, some are on the streets, and then hopefully a few have fought their way out and are living in an apartment or at least in a weekly motel above ground.

Two of my favorite interviews in Beneath the Neon were Harold and Gary. Have you seen them recently?

I saw Harold maybe a year or two after our interview. He’s still living in the same area of the tunnel system. Gary—one of the best things to come out of the book was that I started a community project called Shine a Light. It’s a collaboration between myself and HELP of Southern Nevada. I take their social workers into the tunnels, and they offer housing, drug counseling, and medical attention to the people down there.

Gary was in prison for a little bit. He got out about year ago and had a heart attack. He went into the big public hospital here. I picked him up and we were able to get him into HELP of Southern Nevada’s program. He’s been housed for about a year. He’s got a cell phone and stays in touch.

That’s awesome! It’s got to be a good feeling. And Shine a Light – when did you start that?

Part of the reason I wrote Beneath the Neon was to call attention to the fact that people were living down there and hoped that something would be done about it. So in the spring of 2009 I reached out to HELP of Southern of Nevada and we started collaborating then.

You spent hours exploring the drains. I can’t imagine going through all that information to create such a cohesive book. Can you tell me about your process?

So it is cohesive? That’s good to know. (laughs)

One of the best things about the book is that Matt’s voice comes through loud and clear. I feel like I’m sitting next to him while he’s telling the story rather than reading another nonfiction book. He’s happy to hear this.

It’s challenging. I’d have two to three hour-long conversations with people, and then I’d go home and have to transcribe them. I’d go through the tapes, figure out the best stuff and polish to where I thought it would work.

How long did the whole process take, from research to having it ready for your publisher?

It was a bit of a strange process. I took a sabbatical from CityLife in summer of 2004. I just explored, and when I found really good stuff in a tunnel, I’d work on the rough draft before going back out. I spent that whole summer exploring and working on the rough draft. Sent it the editor, he gave me some feedback. I reworked a second draft, and then tried for final draft form with the third one. Took about two-and-a-half years to get into form.

When you first go into the tunnels, you’re nervous, and I don’t blame you. Is it scary every time you go in?

When Josh Ellis and I first went down into the drains, it was horrifying. I was paranoid. We’d seen some pretty crazy stuff in broad daylight here in Vegas. We had no idea what went on in a darkened tunnel. We were heavily armed. Every little noise was horrifying. Now, I’m more calm and controlled but there’s always tension. Going into a storm drain, you never know what to expect.

Were most of the people you spoke with willing to talk, or did you have a lot of resistance?

I talked to about fifty, sixty people, and there’s about seven or eight interviews in the book, so a lot were left out. People would tell me “you’re in the wrong place, get out of here.” One guy said, “I have a gun, I’ll shoot you. You don’t know who I am.”

Wow! (I don’t tell Matt this, but I would have wet my pants at that point.)

No one physically attacked me, but my worst fear was to be in the tunnels and a mad man come charging out of the dark and I’d have to defend myself on his turf. Nothing like that happened. Most people were really respectful and kind. They don’t want to do anything to get kicked out of one of their few options for a home.

Your second book is My Week at the Blue Angel. Can you talk a little bit about it?

The Blue Angel is a collection of creative nonfiction stories set in off the beaten path Las Vegas. Weekly motels, trailer parks, low rent apartments. Two stories take place in the flood channels. They’re the original pieces Josh Ellis and I wrote that served as background for Beneath the Neon, but they’ve been reworked a bit.

The title refers to one of the stories in the book. I checked into one of the seedier, more poetic weekly motels and stayed a week.

What are you doing right now? Are you still at CityLife?

No. I left about three and a half years ago to be an independent author and journalist. I live off my book royalties, freelance writing, consulting work and the occasional drug deal. Just kidding, mostly, about that last thing.

I’m working on a novel. It’s urban/alt lit. Set in off the beaten path Vegas, has national and international themes. Sort of my take on the recession. It’s a bit of a hybrid between journalism, memoir and fiction.

Do you have any advice to writers just starting out?

Make sure you’re into it for the right reasons—you love writing and the researching process. Make sure it’s something you feel you really need to do. It’s a commitment. A lot of times you’re not going to make much money and might not get published. It can be a challenging profession but a rewarding one if it’s something you’re passionate about.

During my research for Beneath the Neon, I’ve been very curious about the quarries of Paris where there’s a lot of artwork and underground raves, films shown down there. If I ever make it to Paris, one of the things I would want to do is go into the quarries and check them out.

Thank you so much for taking the time to talk with me.

Thanks for the call and the interest in my work.

To buy a copy of Beneath the Neon, My Week at the Blue Angel, or to donate to Shine a Light, click here.

To check out my novel Into The Dark, which drew a lot of inspiration from the tunnels, visit Amazon or MuseItUp Publishing.

Enter the INTO THE DARK Charity Raffle!

The homeless living in the storm drains of Las Vegas played a vital part in INTO THE DARK, and I want to give back. From November 1st until February 28th, participants will have several options to enter the raffle, including donating to HELP of Southern Nevada. The grand prize will be a $100 donation from me in the winner’s name to the homeless shelter of their choice.

Stacy Green is the best selling author of psychological thrillers and mystery with a dash of romance. As a stay at home mom, she's blessed with making writing a full-time career. She lives in Iowa with her supportive husband, daughter, and their three fur-babies.
View all posts by Stacy Green →
This entry was posted in Thriller Thursdays and tagged author, charity, homeless, Las Vegas, Las Vegas tunnels, Matt O'Brien, Stacy Green, Stacy Green suspense author, Stacy Green Turning The Page, writer, Writing. Bookmark the permalink.